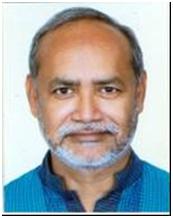 
Mohiuddin Ahmad is a writer, researcher and a columnist. He writes regularly for  the Prothom Alo, a national daily  with the largest circulation. He is engaged with several regional and global  civil society networks and campaigns, such as, SAAPE, LDC Watch, People’s SAARC  and Jubilee South. He is an ARENA Fellow since 1983. He has so far authored and  edited 38 books including seven poems and two novelettes. Notable among these  are: Karadondo Chai (2012), Seoul Diary (2009), From Jamuna to Nile (2007), Deep  Divine Darkness (2006), Sorrowful Yard (2004),Thorny Path (2004), Dream Merchant (2001), Pita Hi Paramantapa ( 2000), Karl Marxer
Kobita (1995), Living with Cyclone (1992), Deluge in the Delta  (1989).
For earning bread, Mohiuddin  Ahmad is currently involved in macro level planning exercise in agriculture,  water management and livelihood development. He renounces all forms of  accidental identity in terms of citizenship, ethnicity, faith and sex, as none
of these has been earned by him. His main concern is ‘absolute freedom’, which  is freedom from fragmented identities based on social constructions. He believes  in a positive notion of anarchism.